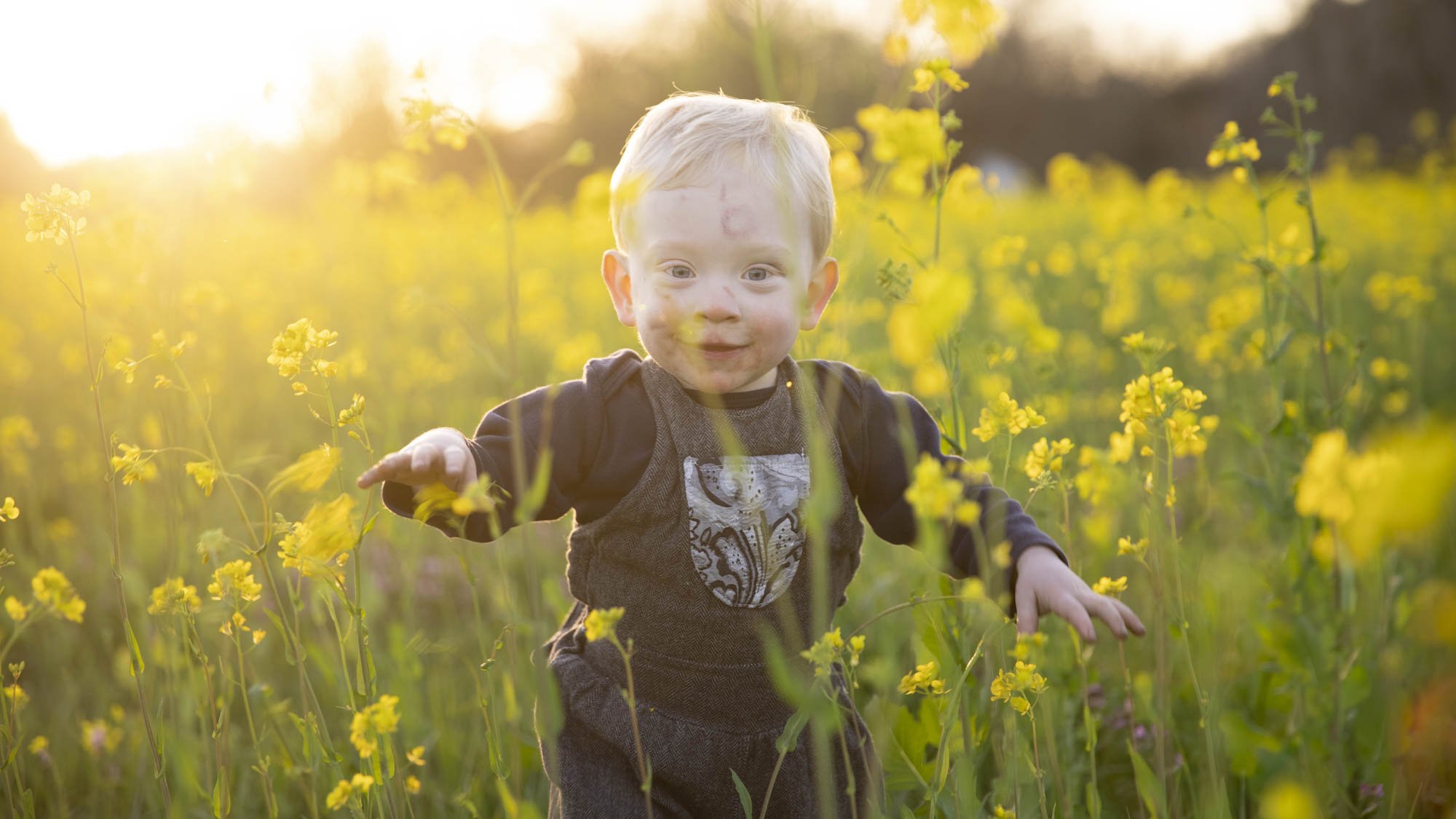 I kept hearing from other parents about how there is this time while raising your kid where your whole job becomes keeping them from killing themselves. I thought this was hyperbole until my toddler decided it was his time to prefect the art of the face plant.

Now, hardly a day goes by where he doesn’t crash test dummy himself in new and exciting ways I’d previously not conceived. To add to the excitement of his new hobby, he’s also made the creative decision to occasionally get so worked up that he’ll hold his breath and pass out after parkouring onto his face.

Apparently this is an inherited trait as my mom has told me all my life about how I’d get worked up about something when I was his age and hold my breath until I blacked out. I have no memory of any of this and used to just think she was being dramatic. Karma’s a son of a bitch like that.

I’m not joking. The other day he decided to practice a new move and fell right onto his eye. Thankfully the edge of the coffee table was there to catch his fall so he could acquire a new shiner to show off to the ladies.

When he did this, he fell down and started to cry so hard that sound stopped coming out. I scooped him up and held him close knowing he’d soon go limp. This is when the fun part happens that mom didn’t tell me about.

After he passes out he also stops breathing. It’s tough to say how long this whole event was (time seems to distort when you’re in battle) but I’d estimate that this particular episode was somewhere between 3 and 10 seconds long.

I rubbed him, then began patting him on the back getting more and more aggressive as time went on. Finally, and all at once, he stiffened his body and took a big gasping breath as he slowly regained consciousness. Dazed and confused, he slowly woke up as if he’d just taken a long nap.

The above explains the black eye in the following photos. The rest you’ll have to ask his mom about. 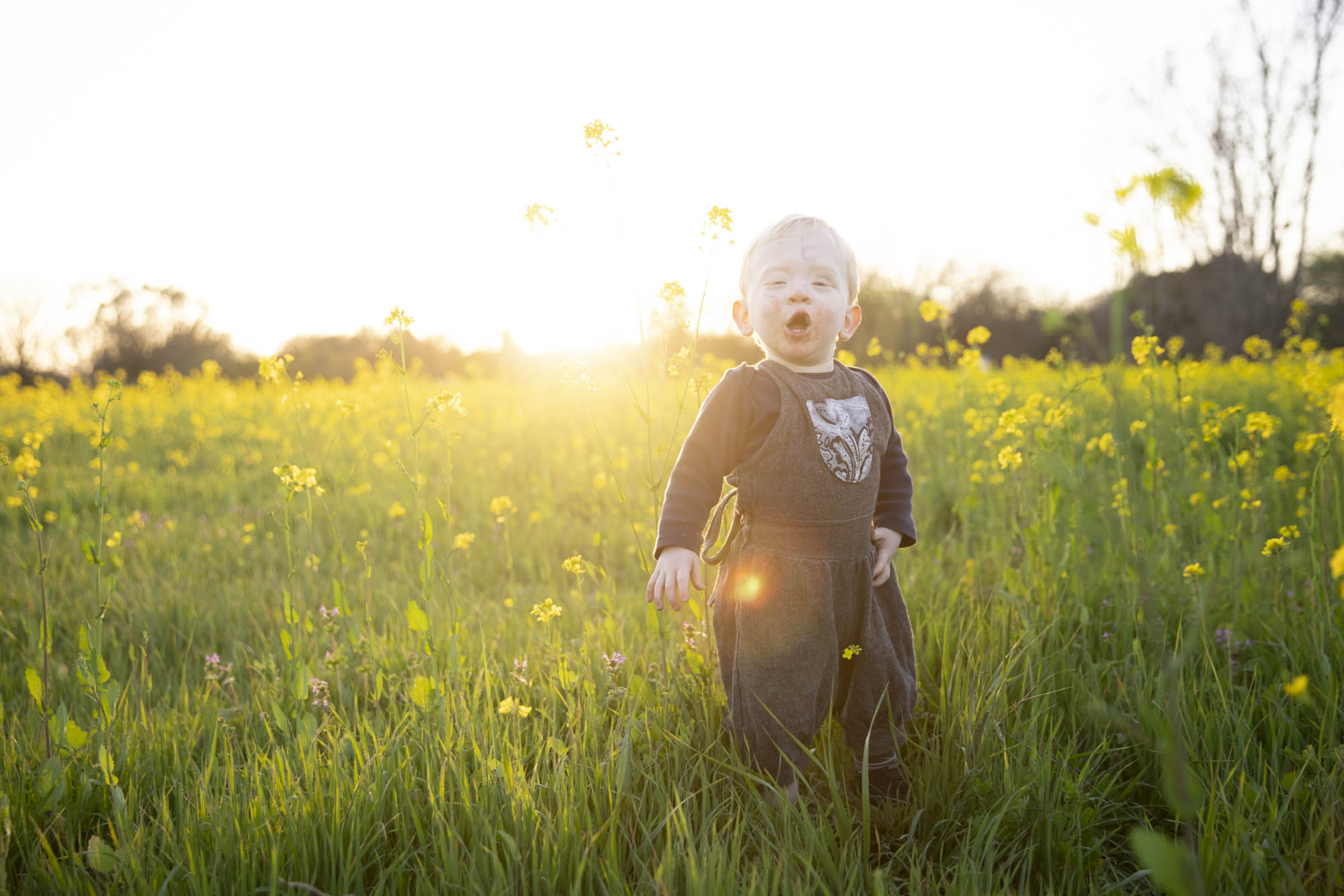 None the less, my wife and I still love his dumb face and both of us thought it would be nice to get some portraits of him in the wild flowers which explode around our house this time of year. Not only do they bloom naturally in the fields, but vineyards also plant them between the rows as a gorgeous, natural weed control. It’s staggeringly gorgeous, and both of us thought it would make for a fantastic (if not kind of hilarious) setting for our little cage fighter.

So we scouted some areas the day before and settled on a quiet field just across town. There, we’d try to catch some sunset portraits of our white goblin in the field among the mustard the following evening.

When we got out there the following day I tried a few things that frankly didn’t work at all. He cried and refused to be placed in front of my strobe. I’m pretty sure that at one point he yelled at me in Klingon that he was NOT a prop. We also had a discussion about how I could try and pry his smoothie from his cold, dead toddler hands if I wanted to fight club him for it. Message received, Hayden will not be taking direction this day.

So rather than take my toddler up on his challenge and Tyler Durden his Bird of Prey (see what I did there) I out flanked him with my superior adult intelligence and shifted my mindset. I decided to lean hard on the auto focus capability of my Canon R5, and just let him run around for some candid portraits.

For those that don’t know the Canon R5 is the newest cutting edge camera offered by Canon. It has an auto focus system on it that is vastly more consistent and accurate than anything I’ve ever used before.

In layman’s terms the best way I can describe the auto focus on this thing is if you had the Terminators heads up targeting display in you own field of vision. The camera basically finds eyeballs, locks on, and doesn’t let go. It is best weapon I’ve ever used to capture toddlers running though mustard, back lit by a setting sun.

All kidding aside, shooting though flowers and into direct sunlight is a VERY challenging scenario for any camera excluding the toddler variable. I’m still awe struck at just how accurate the AF system on this camera is.

Easter Gifts for the Grandparents

Conveniently, the wild mustard fields usually bloom with just enough time to have prints made for family before you see them over the Easter holiday! Get in touch here inquire about availability for mid February when the mustard is at it’s peak! Looking forward to capturing your little critter!

What Makes A Good Portrait: The 5 Elements All Great Portraits Have